Intelligent location-based services should be highly relevant and precisely targeted to each user based on their real-time position and historic travel behavior.  To allow users to plan ahead, location-based alerts (e.g. traffic accident notifications, LBS advertising, etc.) should be sent to travelers before they reach the alert area (e.g., traffic accident, business placing the ad, etc.).

Since human travel behavior is highly repetitive in both space and time, Path Prediction[1]uses spatial representations of a user’s historical trips along with their current position to predict the paths they may take in the immediate future, as well as their estimated departure time from their current location. 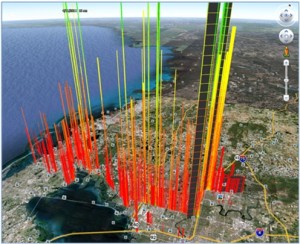 User travel behavior is processed by a Fast GPS Clustering algorithm to produce locations that the user frequently visits, called “Points of Interest (POIs)”.  During this clustering process, smaller clusters where users stop for a short amount of time, but does not perform an activity, are also identified as “pseudo-POIs”.  Pseudo-POIs are often stop lights and other areas of frequent traffic congestion.  Figure 6 shows both POIs (in yellow and green), as well as traffic delays (red and orange) as histograms on a map, where the height of the cluster indicates the number of times that the user stops at that location.  So, the largest green POIs likely indicate the user’s home, work, and other locations that are frequently visited (e.g., school, grocery store, etc.).  The largest orange pseudo-POIs likely indicate locations where the user is often stopped in traffic.

Using this travel information history, Path Prediction is able to deliver traffic accident alerts to users just before they are planning to leave their location, allowing them to consider other routes.  In the context of advertising, an ad could be sent to a user before they depart on their trip, allowing them enough time to plan for the deviation to take advantage of a sale.  The real-time predictions of the users paths is shown in Figure 7, with the yellow push-pins indicating their real-time location and the yellow lines indicating probable paths (identified by the server in real-time) that the user will likely take, based on their travel history. 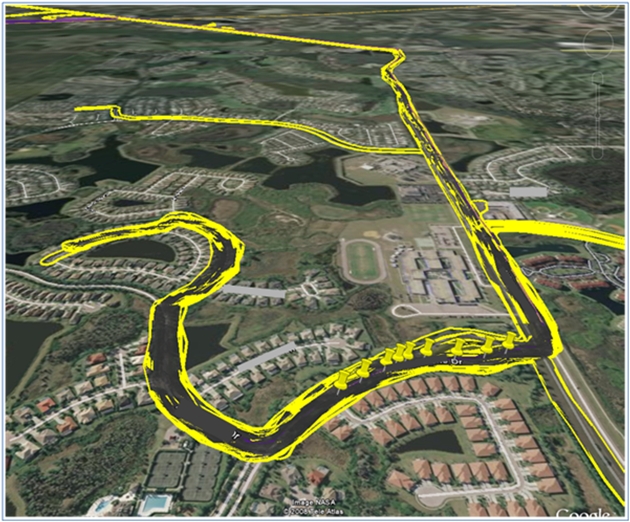 Yellow push pins represent the user's real-time location, while the yellow paths are the probable paths the user will take, predicted by the Path Prediction algorithm, based on their personal travel history